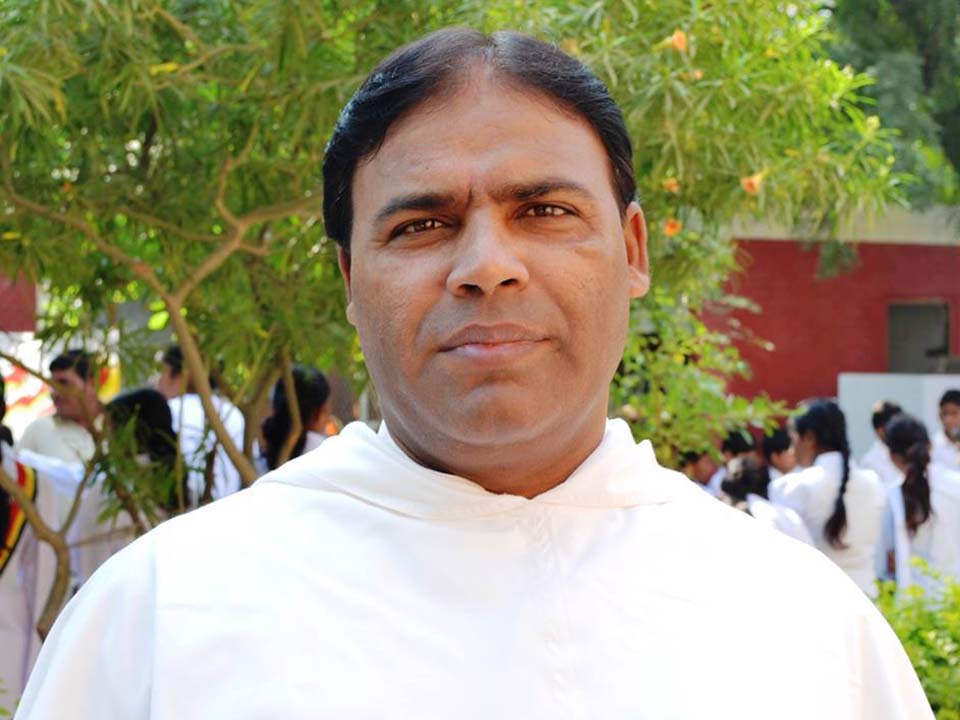 The saintly figure of Ibn-e-Mariam Vice-Province Pakistan, Fr. Almas Silas OP was born on 15th of September 1973 in the family of Silas Masih and Naziran Bibi. He was the third among six siblings. He was the first Dominican vocation from the Immaculate Conception Parish Mianwali. He got his primary education from St. Teresa School and passed his matric from Government High School Mianwali. He was a self made person. After passing matriculation, he started working as a news-paper-seller in order to continue his studies. He completed his bachelor degree through Ilama Iqbal Open University and completed his graduation. According to his parents since childhood, Almas had very much inclination toward religious observance and used to fast for forty days during the Lenten Season. He loved to play cricket with his companions. His peers witnessed that from his teenage he had a good repute in the city as an honest and pious person. His lifestyle was very simple and he was very regular for the Sunday Mass. After recognizing his religious vocation, he contacted his parish priest Fr. Tariq Bhatti who introduced him to the Dominicans. He entered in Louis Hall Dominican House of Formation Multan in 2003 and first did 9 months Religion Teaching Course (RTC) from Pastoral Institute Multan then entered into novitiate. After completing his novitiate he made simple profession on 8th December 2005. After philosophical & theological studies he was ordained priest on 27th September 2012 at Holy Rosary Parish Faisalabad by his Excellency Bishop Ruffin Anthony. After his priestly ordination he served for six years at Sacred Heart Parish Sahiwal; first two years as associate pastor and then four years as parish priest, he built three chapels and some new churches in the parish. He contributed to the construction of a sub-center in Arifwala. He was a good writer and consistently wrote several articles in different magazines such as Paristish, Catholic Naqib and Dominican News Letter. He was good in IT skills. He was also serving as Promoter of Rosary and was assistant to the Syndic of the Ibn-e-Mariam Vice-Province. His main personality traits included obedience, simplicity, prayerfulness, humility, and pastoral zeal. He always paid respect to his elders, teachers, superiors and formators. He had a deep concern for the poor and needy. He was a man of discipline and punctuality. With profound devotion for Mother Mary he used to recite Rosary everyday. At the time of his death rosary was found in his pocket. He always gave importance to the time and community life. Since one year he was the local superior of Lahore community. In his limited priestly service of 8 years, he was never aggressive to anyone. Like St. Dominic he always contemplated on the Word of God and helped the people in their different needs. Since he joined religious life a bit late, he was respected by his classmates and was a fatherly figure to all the Parishioners. He had compassionate heart for the youth and was always ready to support them to discover new horizons. Through his way of living he inspired his nephew “Waqas Gabriel” who also join the Dominicans and made his final profession in the year 2020 and now doing his theological studies at National Catholic Institute of Theology Karachi. At the age of 47, he had a sudden heart attack and was taken to the hospital but attack was so severe that on the way to hospital he died. His funeral rites were observed on the 20th December 2020 at St. Luke’s Parish Shahdara in the presence of 50 priests, many religious brothers, sisters and parishioners. Rev. Fr. Younas Shahzad OP paying tribute to Fr. Almas said in his homily that we need friars like Fr. Almas true, love of the people and true follower of St. Dominic. He also acknowledged all his service in the vice province. After funeral mass, his body was taken for burial to Gora cemetery of Lahore with great honor and Dominican tradition. May the Lord accept all his services and grant him eternal rest.